“Play with yourself for my entertainment” I commanded and sat back to watch the performance.

As he worked away I watched his cock bulge and stiffen. He was now close to coming. So I reminded that I make the rules of this particular game.

“Keep wanking but I forbid you to come.”

He stopped and looked at me.

“Did I say stop? Keep wanking but you are on no account to come.”

He resumed his task with obvious reluctance, his movements now slow and hesitant.

“Mistress I am about to come.”

“Wank harder and do NOT come.”

He looked at me pleadingly and I could see fear in his eyes.  This spurred me on. I was inside his head and I was going to torment him. When I am in this headspace I am a merciless sadist and his evident weakening sharpened my appetite for the kill.

“Keep wanking “ I said firmly as he slowed again.

He resumed his task. Now on the edge, with the slightest touch likely to bring him to ejaculation, he was in a terrible predicament. He stiffened, he arched his back, spread his legs and writhed and contorted , desperately trying to avoid the forbidden orgasm, and the harsh punishment that he knew would follow any failure to comply with My orders.  I laughed. I felt arousal, not at the sight of his wanking but rather that at his desperation, the mental and physical agony  I was subjecting him to. I was a sadist in full flow and loving every minute.

Check out the other awesome posts here 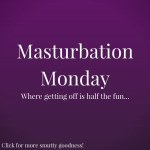 © {2014-2021} All rights reserved. No part of this website may be reproduced or transmitted in any way without prior permission of the website owner.